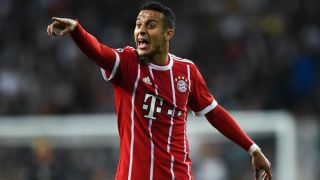 Thiago Alcantara has suggested his future at Bayern Munich is uncertain, although he insists he is focused on the World Cup for now.

The 27-year-old midfielder signed a new four-year contract in April last year but has been linked with a possible return to Barcelona in recent weeks.

Thiago made 32 appearances in all competitions for Bayern this season but did not play the full 90 minutes in two of their biggest games. He came off the bench in the first half of the Champions League semi-final first leg against Real Madrid, while he was angry at being substituted in the DFB-Pokal final defeat to Eintracht Frankfurt.

Bayern great Lothar Matthaus slammed the player's performances in key matches after that 3-1 loss in Berlin and said the club should consider selling him in the transfer window.

Thiago is ignoring speculation while he prepares for Spain's World Cup campaign but has admitted his future at the Allianz Arena is far from guaranteed.

When pressed on whether he would stay, he told Mundo Deportivo: "Let's see. I told you I renewed with Bayern last year, but it's very complicated. Football is very difficult...

"I'm very much about enjoying the moment. You don't have to focus on the future. Now, I'm thinking about the World Cup, I'm living in the present and if a moment comes for you to think about it, I immediately focus on the World Cup."

Thiago joined Bayern from Barca in 2013 and has won five Bundesliga titles in a row, as well as the DFB-Pokal, the DFL Supercup and the Club World Cup.

He has also been linked with a move to Manchester City to reunite with Pep Guardiola, who coached him at Barca before bringing him to Germany.