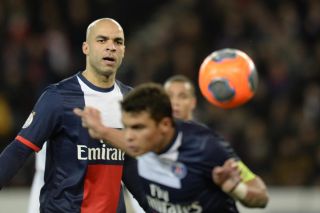 The centre-back was forced off with only 30 minutes on the clock after a clash with Lorient forward Vincent Aboubakar.

And after medical tests were conducted on Saturday, PSG announced that Silva had sustained a fracture to his zygomatic bone.

Although a timeframe for his return has not been set, the French champions do not expect their skipper to miss their UEFA Champions League quarter-final tie, which takes place early next month.

"His condition did not require surgery. The downtime will depend on the evolution of pain in the coming days," a statement released on PSG's official website read.

PSG, who sit 11 points clear of Monaco at the top of Ligue 1, host Chelsea on April 2 before travelling to London for the return leg on April 8.