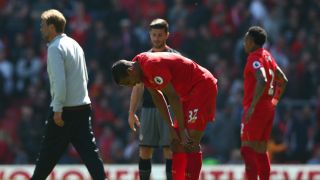 Liverpool manager Jurgen Klopp accepted he was likely to find little sympathy for the mitigating factors he identified as the cause of dropped points in Sunday's 0-0 draw with Southampton.

James Milner had a second-half penalty saved to check the Reds' hopes of Champions League qualification but Klopp – who was ridiculed earlier in the season for identifying a strong wind as one of the reasons for defeat to the Saints in the semi-final of the EFL Cup – bemoaned the visitors' timewasting and a dry Anfield playing surface.

Fraser Forster brilliantly kept out Milner's spot kick after exchanging words with his former England team-mate, while Southampton also had Cedric Soares and James Ward-Prowse booked during the delay between Jack Stephens' handball and the penalty being taken.

Klopp shrugged wearily and smiled ruefully as he discussed the incident at a post-match news conference.

"I really don't like it, even after we only drew, to make a story of it. You saw what they did, why do you need my say on it?" he said.

"With this delay and with the time play of Southampton… I don't know how long Forster needed altogether for his kicks. Four minutes [added time], I have to say that's ambitious.

"Obviously I have nothing to do with it, I can't decide. Whatever we say, we always look then like bad losers or whatever.

"You saw it, write it and then, if nobody reads it, obviously it's no issue."

"I know nobody wants to hear it but I'm brave enough to say it – the pitch was really dry," he explained.

"We gave all the water we had but then after 15 minutes, with the wind, it was really dry.

"It was difficult, you could see it. A lot of passes you thought, 'why are they playing like this'.

"In a possession game you need to have the best, if possible, circumstances. We couldn't have this. It's nobody's fault, it's only a description."

Liverpool sit third in the Premier League  - a point and a place above Manchester City, who have a game in hand as the top-four battle looks set to go down to the wire.

Arsenal's win over Manchester United earned Klopp's men a measure of breathing space over the chasing pack as they prepare to visit a West Ham side buoyed by a victory that effectively ended Tottenham's title hopes on Friday.

"They are in a positive season-finishing mood. No pressure anymore," Klopp added.