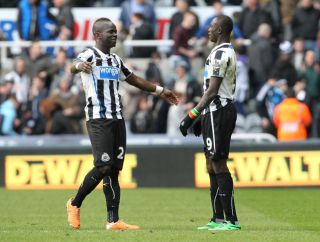 Pardew was confident defensive midfielder Tiote, who has been at Newcastle since 2010, would remain at the club beyond the transfer deadline on September 1.

"We've not really entertained any serious thought of him leaving. I've had no indication from him that he wants to go."

Pardew added: "There is a contingency plan in place, you have to be on your toes all the time, but I'm as confident as I can be with any player that he will stay."

The Newcastle coach said the club were aiming to add to their playing stocks before deadline day.

"Maybe we will bring another one or two in," Pardew said.

"We've got our finger on the pulse of the market and if something comes our way, and we felt it was good enough and financially viable, we'd do it."