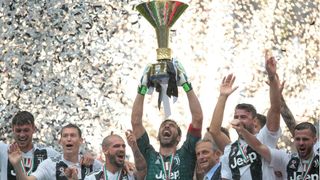 Juventus great Alessandro Del Piero paid an emotional tribute to his former team-mate Gianluigi Buffon after the goalkeeper's final game for the club.

Buffon, who turned 40 in January, bid farewell to Juve in the 2-1 victory over Verona on Saturday, as the Bianconeri celebrated their seventh straight Scudetto with a win.

Del Piero won the 2006 World Cup alongside Buffon for Italy and posted a glowing tribute to the former Parma keeper on his official Instagram page.

"Today is your moment, Gigi. It's the day in which you looked everyone in the eyes, shaking off the tears as you saluted your fans for the last time," Del Piero wrote.

"You lifted another trophy of a legendary and infinite career that I was privileged enough to experience with you for half my life. You have been magnificent.

"I left you with the first Scudetto, today you said goodbye holding the seventh. Seven Serie A titles in a row: crazy!

"You should know well, though, that the story in reality will never end. It's a story that forged you and will guide you in a future that will be full of emotion, success and a sea of things to do.

"It's a story that never goes away. Good luck in the future, Gigi. You deserve it."

Goals from Daniele Rugani and Miralem Pjanic put Juve in control early in the second half at Allianz Stadium, allowing Buffon to take centre stage when he made way to a standing ovation just after the hour.

Buffon made his way around the edge of the pitch to say goodbye to the Bianconeri faithful while the game continued - Alessio Cerci pulling one back for the visitors before Stephan Lichtsteiner missed a late penalty.

Switzerland international Lichtsteiner is also calling time on his Juve career and he paid tribute to Buffon on Twitter.

"A point of reference, a role model for a great class, tireless work and perfect behaviour. Simply phenomenal, on the field and as a man!"

Goodbye idol! You are and will remain not only the best goalkeeper in the history of football, but you are and will remain a perfect captain ... a point of reference, a role model for great class, tireless work and perfect behavior. Simply phenomenal, on the field and as a man! May 19, 2018