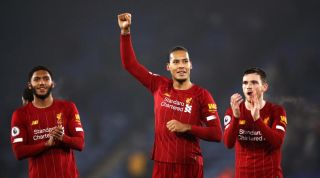 Liverpool chairman Tom Werner says he is "pinching himself" at the club's lofty position in the Premier League.

The Reds are currently 22 points clear of Manchester City as they seek their first championship crown since 1990.

They are also through to the fifth round of the FA Cup and the last 16 of the Champions League, where they will face Real Madrid.

However, Werner is not getting carried away and has stressed that there is a long way to go in the title race, despite Liverpool's healthy lead at the summit of the standings.

"I am pinching myself, but we haven't done the job yet," Werner said.

"I keep saying to everyone I talk to that we really need to savour this because I appreciate the record we have achieved so far and I don't think it is going to come along quickly [again]."

"The level of competition in this league is so great eventually you think you are going to have an off day.

"But that hasn't happened yet, which is a great compliment to Jurgen because obviously, the team is playing at peak talent every week.”

"As Jurgen said, we haven't done the job. We haven't accomplished anything yet. There will be time to enjoy this even more at the end of the season."

Klopp has been a vocal critic of English football's calendar, with Liverpool forced to contest an FA Cup fourth-round replay during their winter break.

Klopp refused to attend Tuesday's meeting with Shrewsbury in protest, and Werner says his manager was right to make his opposition known.

"We all have to look at the calendar," he added. "We are all concerned at the amount of stress we are putting on our players. It is a bigger issue and I am not competent to know what the solution is."