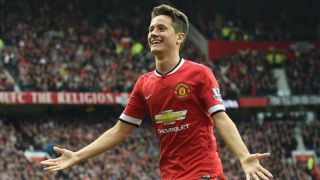 Ander Herrera has his sights set on silverware next season after Manchester United secured a top-four spot in the Premier League on Sunday.

The Spaniard netted the opener in the 1-1 draw with Arsenal at Old Trafford to guarantee at least a place in the UEFA Champions League qualifiers next term.

A return to Europe's elite club competition was always United's aim, according to Herera, but he has bigger ambitions for his second campaign in England.

"We are happy because we are in the top four and that was the first aim of this season," he told MUTV.

"But we are Manchester United and next season we have to fight for all trophies.

"We are representing the biggest club in England and we fight for everything."

A title challenge was never on the cards this season for United and they stumbled in the cup competitions - losing to MK Dons in the League Cup second round and Arsenal in the fifth round of the FA Cup.