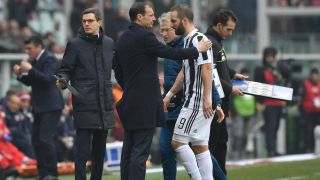 Juventus lost Gonzalo Higuain to injury as they claimed a 1-0 derby win over Torino on Sunday to move top of Serie A, temporarily at least.

Alex Sandro scored the only goal of the game in the first half at the Olimpico Grande Torino to make it just one defeat in 24 league meetings for Juve with their city rivals.

However, the loss of Higuain after quarter of an hour will be a cause of concern for Massimiliano Allegri, even though Paulo Dybala was able to make his return from a hamstring injury.

Torino, who had won three and drawn one of their previous four home matches without conceding a goal, were the better of the two teams in the opening exchanges before Higuain went off after failing to run off a knock.

Juve, who started with Wojciech Szczesny in goal as one of four changes to the team that drew 2-2 with Tottenham in the Champions League, looked short of their best but struck the decisive blow through Alex Sandro in the 33rd minute.

It proved to be a fairly comfortable last hour for the champions, who move a point above Napoli at the top ahead of their clash with SPAL later on Sunday, but Higuain's injury will have soured the celebrations.

Higuain's match came to an end 15 minutes in, the striker deciding he was not able to continue having apparently hurt his ankle after hurdling goalkeeper Salvatore Sirigu.

Juve seemed unsettled by the loss of the Argentine and their frustrations grew when Cristian Ansaldi escaped punishment for a crude lunge on Miralem Pjanic.

Torino created the better of the early chances, too, with Andrea Belotti firing into the side-netting and Szczesny claiming Lorenzo De Silvestri's header, but the visitors struck the first blow 33 minutes in.

Federico Bernardeschi, on for Higuain, drove past Cristian Molinaro into the box and fired towards the far post, giving Alex Sandro a simple finish on the goal line.

With their lead intact, Juve appeared happy to soak up any Torino pressure early in the second half, before Dybala was introduced just past the hour mark for his first Serie A appearance since January 6.

It was the Argentine forward who had the first real chance to add to Juve's lead, racing onto Bernardeschi's pass into the area but just failing to steer the ball on target with his right foot.

Dybala's touch seemed to be deserting him on his return, as he sliced another good chance over the bar after Alex Sandro teed him up 15 yards out, and scuffed a shot straight at Sirigu after a promising run.

They did not prove costly misses, though, as Juve saw out a ninth-straight win in the top flight ahead of a crucial run of matches, which includes league and Coppa Italia meetings with Atalanta, a trip to Lazio and the return clash with Spurs at Wembley.

- Juventus have won nine league games in a row for the first time since May 2016.
- The champions have conceded only one goal in their last 12 Serie A matches and none in their last six.
- Since Walter Mazzarri's appointment as coach, Torino have lost their first match and failed to score for the first time in Serie A.
- Paulo Dybala attempted three shots between the 66th and 70th minutes. Juventus had attempted only four in the until that point.
- Federico Bernardeschi has been directly involved in six goals in his last five Serie A appearances (two goals, four assists).