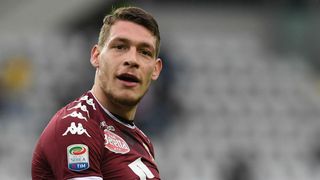 Milan have made public their interest in Belotti, who has a release clause of €100million for foreign clubs after scoring 26 goals in Serie A last season.

Torino have no plans to sell the 23-year-old and nine-time Italy international, as long as he remains motivated at Stadio Olimpico Grande Torino.

"The lad's done very well with us but he has to stay with us and he can stay," Cairo told Premier Sport. "I'll only be forced to sell him if someone abroad comes forward with the player's release clause to buy him.

"I haven't negotiated with anyone. I've always said that I'd like to have him motivated here, but I've also said that in all my companies, I have motivated staff.

"He is engaged with us until 2021. And I think he would do well to stay one more year with us, to go to the World Cup with momentum. He can have a great season with us.

"I don't want to sell him, but there's a clause. If someone from abroad comes with €100m, then I shake his hand and wish him good luck."

Cairo added via Sky Sport Italia: "Our intention is to keep Belotti, he'll be our next signing. I think it's a good thing for us and for him, and I want us to stay strong.

"We'll try to keep all our best players, we'll only make three signings to complete the squad, having already brought in [Alejandro] Berenguer.

"Belotti's a good and sincere lad, I'm sure there will be no problems like there were last year for [Nikola] Maksimovic, who troubled us with his behaviour.

"Club must comply with contracts, but respect must be mutual. It would be nice to keep our players motivated here, but things can change from one year to the next."

"A new striker for Milan? [Nikola] Kalinic has more quality with the ball at feet, but I prefer Belotti because he's bigger, hungrier and more of a handful," Vieri told Sky Sport Italia.

"Still, he must continue to fight like an animal. He reminds me of [Torino's all-time top scorer Paolo] Pulici. I advise him to go to a big team quickly. He must make another leap in quality."