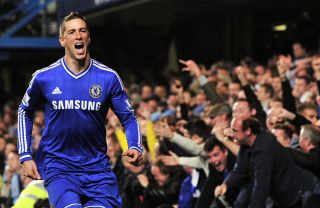 City looked to have earned a share of the spoils after Sergio Aguero's superb 49th-minute strike cancelled out Andre Schurrle's first Chelsea goal since his move from Bayer Leverkusen.

But Torres - who missed a golden opportunity to open the scoring, teed up Schurrle and rattled the crossbar before the break - had the final word as he chased a hopeful punt forward from substitute Willian to capitalise on confusion in the visitors' ranks.

Centre-back Matija Nastasic looked to execute a routine header back to his goalkeeper from the high ball but looked on in horror as Hart charged past his touch on to leave Torres with a simple finish.

"When it happens in a game like this against a great team like Manchester City, the last minutes of the game taste much better," the striker told Sky Sports.

"I think 1-1 maybe was not the fair result of the game. I think we controlled the game most of the time. We created chances, especially in the first half.

"But as you can see they have everything with players like Aguero. They can score a goal at any time.

"At the end I think we won a game we deserved to win and we're happy because this is the first victory against one of the contenders for the Premier League.

"You never know which (moment) will become the most important of the game. It was a long ball, not the best understanding between the defender and the keeper and you win the game in that action.

"Every ball has to be the most important ball of the game because it can be the ball that gives you the lead."

Torres eventually built impressively upon his midweek UEFA Champions League brace against Schalke but his early miss sparked fears of another torrid afternoon in Chelsea colours for the ex-Liverpool man.

"Everything happened for Torres after he missed an easy chance. After that, we saw the best Fernando," said Mourinho.

"He worked unbelievably for the team. The second goal was a 'believe goal'."

Mourinho felt his side beat the Premier League's best team despite City languishing in seventh position on the back of a third away loss this term.

"We won a game which was very important for us. We beat maybe the best team in the Premier League," added the Portuguese.

"I think there are five or six fantastic teams who will fight for the Premier League. They (City) are the best team, very dangerous and physical.

"When you beat maybe the best team, it gives you positive feelings."