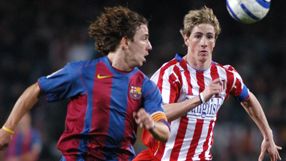 The Spain striker was dubbed Barca's "Bestia Negra" (black beast) in his five top-flight seasons with Atletico before leaving to sign for Liverpool in 2007.

He made his La Liga debut at the Nou Camp aged 18 in September 2002 and his pace helped him to knock seven goals past the Catalans, including six in Barcelona's title winning years of 2005 and 2006.

"The Nou Camp is a place that has a special significance for me because I made my La Liga debut there and their fans have always been very good to me," Torres told Spanish radio back in 2006.

"Last year, they applauded me after I scored the two goals there."

It was also Barcelona who helped make up his mind that he should move on from Atletico, he has said, to try his luck elsewhere at the end of the 2006/07 campaign.

Fan-favourite Torres was Atletico captain when they suffered their biggest ever home defeat, as Barca romped to a 6-0 victory at the Calderon, four games from the end of that season.

Torres's ability to score against Barca had always contrasted with his ineffectiveness against bitter city rivals Real Madrid, though he finally managed to break his duck in a 1-1 draw against them in 2007.

The 28-year-old's analysis of why he seemed to do better against Barca, provides an insight into his tormented time at Chelsea since his British transfer record 50 million-pound move from Liverpool in January 2011.

"You always go knowing that you are expected to lose [against Barcelona] but that just means that you play a little freer without the same amount of pressure," Torres said.

It is perhaps that expectation which has dogged him at Chelsea where he has only managed to score eight times in all competitions, though he has shown recent signs of improvement under new coach Roberto Di Matteo.

Although unlikely to start against Barca, their high defensive line manned by familiar faces such as Gerard Pique and Carles Puyol could be ideal for the confidence-starved striker.

If any further incentive were needed, it could be a last chance to impress Spain coach Vicente del Bosque, as he makes his final preparations before naming their squad for Euro 2012 next month.

Torres, scorer of the goal that won them the Euro 2008 final, was dropped for the recent friendly against Venezuela when the player brought in his place, Roberto Soldado of Valencia, scored a hat-trick.