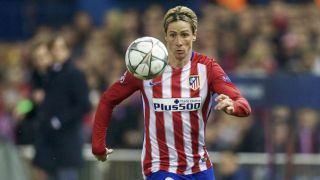 Fernando Torres has signed a one-year contract with Atletico Madrid following the expiration of his deal with AC Milan.

"I'm delighted to continue at home, the only place where I ever wanted to be, and it has finally come true," Torres told Atletico's official website.

"[I am] happy to be here, I've never had doubts about where I wanted to be during all this process in which we didn't know what was going to happen and, in the end, what matters is that I have achieved what I was expecting."

Torres joined Atletico on an 18-month loan from AC Milan in January 2015, but scored just six times in 27 appearances before the end of the 2014-15 campaign.

The striker's difficulties continued the following season, but, after a drought of more than four months, he scored his 100th goal for the club in the 3-1 victory over Eibar in February this year.

The 32-year-old then played a key role as Atletico pushed eventual winners Barcelona to the penultimate round in the race for La Liga and also reached the Champions League final, losing to Real Madrid.

Torres joined Atletico as an 11-year-old and made his debut aged 17 in a match against Leganes in 2001.

Sporting director Jose Luis Caminero is delighted to have retained the services of such a player, who is an example to young players at the club.

"[This is] great news for everyone, since Fernando is part of the family and all the Atleticos are delighted with the fact that he can continue with us," he said.

"He knows the club perfectly and is a benchmark for all of his team-mates. The players trained in our Academy have a model to follow and he always has good advice to give to them.

"He is a man with a tremendous experience, used to winning titles and competing at the highest level."