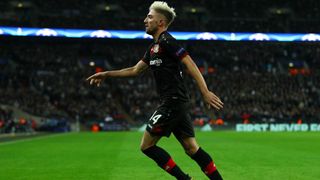 Bayer Leverkusen boosted their hopes of qualifying from Champions League Group E and left Tottenham's campaign in serious trouble as Kevin Kampl's second-half goal gave them a 1-0 away win at Wembley.

Kampl found the net from close range after 65 minutes to earn his side their first win of the European campaign and end a run of five consecutive Champions League draws stretching back to last season.

The two teams fought out a 0-0 draw at the BayArena last month and a repeat scoreline looked to be on the cards after a drab first half.

But the game sparked into life after the break, with Christian Eriksen and Kyle Walker both going close for the hosts before Kampl bagged what proved to be the winner at the other end.

Eric Dier came closest to salvaging a point for the Premier League side, but his late free-kick crashed against the bar and substitute Vincent Janssen was unable to force home the rebound.

The victory was enough for the visitors to leapfrog Tottenham in the group standings and to compound a grim night for Mauricio Pochettino's men, who also lost Mousa Dembele to injury.

Spurs are now four points behind leaders Monaco and two adrift of Leverkusen with only two games remaining.

The hosts made a nervy start, seemingly unsettled by Leverkusen's hard pressing and speed on the break, but ultimately there was little for either set of fans to get excited about during a largely forgettable first half.

Neither side managed to produce a single shot until the 33rd minute when Eriksen's 20-yard strike drew a regulation save from Bernd Leno.

Javier Hernandez saw his goalbound effort deflected wide by Jan Vertonghen just before the break after Julian Brandt's pressure had forced an error from Walker on the edge of his own box.

Tottenham immediately showed a greater sense of urgency at the start of the second half with Dele Alli having a penalty claim waved away after tumbling over Omer Toprak's outstretched leg and the increasingly influential Erikssen firing narrowly wide moments later.

But Leverkusen also looked livelier going forward and Hernandez forced a smart stop from Hugo Lloris after Dier's hesitant defending had put his side in trouble.

Walker then capped a surging run into the box by firing a low cross-shot inches wide of the far post, but it was the German side who hit the front.

The effervescent Brandt got away down the left and picked out Charles Aranguiz, but when his shot was partially blocked, the loose ball fell kindly for Kampl to rifle it past Lloris.

Roger Schmidt's men then defended stoutly to retain the lead and with the notable exception of Dier's free-kick, which struck the woodwork from just outside the box, succeeded in soaking up some concerted pressure in the latter stages to leave Spurs with an uphill task.