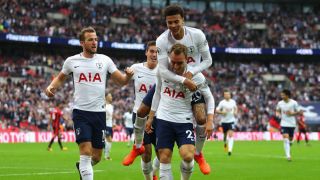 Christian Eriksen scored the only goal of the game as Tottenham finally scraped to their first Premier League win at Wembley against struggling Bournemouth.

Having left White Hart Lane at the end of last season, Spurs had started the new league campaign with a loss and two draws at their adopted home before belatedly securing a 1-0 victory at the national stadium on Saturday.

Mauricio Pochettino had, in his pre-match news conference, taken issue with Manchester City manager Pep Guardiola's reference to Tottenham as "the Harry Kane team" - and it was Eriksen, not the England international, who inspired this much-needed triumph.

An unwanted record had become a distinct possibility for the hosts by the end of a dreary first half, with Spurs potentially becoming the first side in the history of English league football to take maximum points from their first four away games while failing to win the equivalent number of home fixtures.

But Eriksen forged an opener with his side's first attack after the restart and Pochettino's men never looked like relinquishing their lead from that point, even if further goals were not forthcoming.

This result ensures third-placed Tottenham stay within five points of table-topping City, while Bournemouth remain in the bottom three after one win from eight matches.

That it took Kane the best part of 10 minutes to touch the ball said much for Bournemouth's improved five-man defence limiting Tottenham to speculative balls from deep.

A heavy Eriksen touch in the area cost him the opportunity to shoot at goal, before Dele Alli flicked over the crossbar from the Denmark international's drilled centre.

Hugo Lloris brilliantly prevented an Eric Dier own goal with a low save as Bournemouth kept the pressure on and, with the home side scrambling to clear, Lewis Cook blasted over.

A first chance for Kane arrived shortly after the half-hour mark, but he scuffed an effort straight at Asmir Begovic and Toby Alderweireld nodded off target from the subsequent corner.

Given the plodding nature of the opening period, there was a tangible sense of relief among the home supporters as Eriksen took less than two minutes of the second half to break the deadlock.

The midfielder was granted time and space by a mistimed Simon Francis challenge on the edge of the area and calmly stroked into the bottom-left corner.

Kane was correctly denied a headed second by an offside flag, before Begovic twice smothered at the forward's feet as Tottenham looked to put the game to bed.

Instead, the hosts were forced to see out the victory through a nervy final 25 minutes, with Lloris' near post save keeping substitute Jermain Defoe from earning Bournemouth a point against his former side.

Spurs could still have added to the score-line, however, with Begovic producing a strong stop from Eriksen's drive and then watching Alli's stooping header wide.