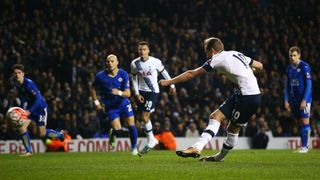 Harry Kane scored a penalty in the closing stages to salvage a 2-2 draw for Tottenham against Leicester City in the third round of the FA Cup.

The England international was initially rested, but came off the bench after the break and proved his worth by slotting home in the 89th minute after referee Robert Madley awarded Spurs a spot-kick for Nathan Dyer's handball.

Christian Eriksen had opened the scoring for Spurs early on when he tapped home a rebound, only for Marcin Wasilewski to restore parity shortly after with a strong header.

The Denmark international threatened two more times before the break, but was denied by Kasper Schmeichel on both occasions, before Shinji Okazaki gave Leicester the lead after the break.

Kane then netted a late equaliser to prevent a repeat of last year's cup result, when Leicester knocked Tottenham out in the fourth round.

The teams will now meet in a replay to determine who progresses to the fourth round.

Spurs manager Mauricio Pochettino opted to rest stars such as Hugo Lloris, Dele Alli and the aforementioned Kane, while Leicester were without the injured Jamie Vardy and Riyad Mahrez, but that did not prevent both sides from playing out an entertaining encounter.

Tottenham made a fine start to the game and needed only eight minutes to break the deadlock. Schmeichel failed to hold on to Nacer Chadli's shot from the left-hand side of the area and Eriksen had little trouble finding the net from the rebound with a calm finish.

The attacking midfielder came close to doubling Spurs’ lead in the 16th minute after a superb free-kick, but Schmeichel did well to deny his compatriot.

Leicester pulled level soon after via Wasilewski. The 35-year-old beat his marker Toby Alderweireld to the ball after a sublime corner from debutant Demarai Gray and hit the net with a strong header that left Michel Vorm without a chance.

Eriksen again threatened following some good work from Son Heung-min down the left, yet Schmeichel pulled off another good save to keep it level.

The visitors could have gone a goal up when Andy King tried his luck from long range with Vorm off his goalline after a headed clearance, but the Dutchman rushed back in time to comfortably gather the midfielder’s attempt.

Claudio Ranieri opted to replace N'Golo Kante with Okazaki at half-time and his decision immediately paid off. The Japan international danced past Tom Carroll and Alderweireld before poking a shot straight at Vorm, but he made no mistake from the rebound to make it 2-1 to the away side.

Chadli looked dangerous after a good individual action in the 54th minute, but the Belgium international's shot lacked the power to worry Schmeichel.

Gray came close to doubling Leicester's lead halfway through the first half, unleashing a powerful shot toward the far corner after cutting inside from the left, yet his attempt went inches wide.

Pochettino opted to bring on Kane and Alli in an attempt to force an equaliser and his gamble paid dividends in the 89th minute. The referee pointed to the spot after Dyer handled the ball inside his own area and Kane coolly converted from 12 yards.