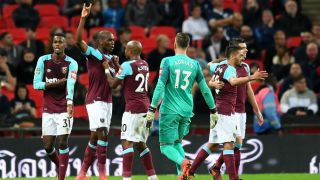 West Ham produced the most unlikely of second-half comebacks to beat Tottenham 3-2 at Wembley and book their place in the EFL Cup quarter-finals.

A dominant Spurs, without the rested Harry Kane, raced in to a two-goal half-time lead thanks to strikes from Moussa Sissoko and Dele Alli to seemingly leave Slaven Bilic's position hanging by a thread.

Two quick-fire goals from Andre Ayew pulled the Hammers level before Angelo Ogbonna crashed a header in to seal a memorable win that provides their under-fire manager with a timely boost.

Bilic will now go into the Saturday's pivotal away clash with Crystal Palace full of confidence, while Tottenham will need to pick themselves up for a mouth-watering clash against Manchester United at Old Trafford, with one of their routes to silverware now gone.