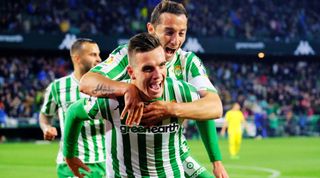 The Star claims that Mauricio Pochettino’s side will splash out around £80 million before the end of the week to continue their summer strengthening.

Spurs spent a club record £55m on Lyon’s Tanguy Ndombele this summer but could eclipse that fee with their deal for Real Betis midfielder Lo Celso.

The Argentina international wants to join the Premier League side but the sticking point has been agreeing a fee, with the La Liga side – who turned his loan spell from PSG permannt for €22m this summer – holding out for £68m.

However, a compromise is close to being reached that will see the 23-year-old arrive in north London for a fee of between £55 and 60m.

Lo Celso is expected to arrive in England this week to complete a medical before the deal is finalised.

Spurs are also working on bringing in Fulham’s Sessegnon and have reached a breakthrough in negotiations that will see the 19-year-old depart Craven Cottage for around £20m plus add-ons.

Fulham, who were relegated from the Premier League last season, are said to be considering asking for Josh Onomah or Georges-Kevin Nkoudou as part of a deal, or use the cash raised from Sessegnon’s sale to table a bid.

Danny Rose is expected to leave Spurs this summer.