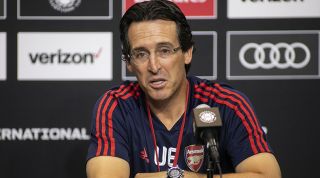 Before Borussia Dortmund were every hipster's favourite European underdog; before Southampton had packaged and shipped their finest talents to Anfield, Arsenal perfected the selling model. “We don't buy stars,” Arsene Wenger insisted. “We make them.”

Arsenal went unbeaten in 2003/04, but Wenger himself found invincibility in the years that followed. He won nothing, yet his reputation grew: a man who could lose the titanic Patrick Vieira, replace him with a lightweight La Masia playmaker and then progress further in Europe. Thierry Henry, Ashley Cole and Robert Pires all left, and were replaced by Emmanuel Adebayor, Gael Clichy and Samir Nasri. When the second wave left too, Arsenal simply reinvested and maintained their top-four status.

Wenger became the Doctor Who of English football: an idealistic, older gentleman who regenerated every season but still bewitched viewers. What could this man be capable of, free of the financial shackles around his wrists? What if some benevolent billionaire could buy Arsenal and set the genie free from the lamp?

That was a different era. We've learned since that wealthy owners are not always kind, Tottenham won't be rubbish forever and Wenger is most certainly vincible. The very last pillar of that revolving-door era, Aaron Ramsey, has just packed his bags and moved to the Alps. Arsenal's old blueprints are buried under the Emirates Stadium in a time capsule now.

OPINION The end of an era – but how will Arsenal fans reflect on Aaron Ramsey?

There are few certainties in north London these days, but Arsenal are no longer a selling club. Every summer, they desperately cling to their players like vases in an earthquake. Bids have been rejected in recent times for Mesut Ozil, Alexis Sanchez, Hector Bellerin and Ramsey. The club would rather leave European club presidents waiting on two blue ticks than suggest anyone is for sale.

It's understandable. Fans questioned why Arsenal were playing such a long game, tirelessly selling and reinvesting, when all it took for Manchester United to walk to a title was splashing out for Robin van Persie. It was the ultimate smack in the face; a dagger to an eight-year philosophy. The Emirates was built on quicksand. Fans yearned for stability – big clubs aren't supposed to flog their stars every season.

Overnight, it was as if Arsenal would rather not look like a small club than accept £60 million from Sheikh Mansour for Alexis Sanchez's services. As if the pride of keeping a depreciating asset was worth more than the embarrassment of rebuilding. Apparently £50m was offered for Ramsey last summer, but the Gunners again chose to run down a contract rather than sell. He, Tomas Rosicky, Santi Cazorla, Jack Wilshere and Danny Welbeck all left for nothing.

Selling stars doesn't have to be a bad thing. It didn't look great for Liverpool when Philippe Coutinho emailed over a transfer request six months into a new deal, but the sale managed to buy two players who delivered a Champions League. Finally binning Riyad Mahrez's cardboard cutout from the Leicester club shop was bittersweet, but the compensation the Foxes received from Manchester City paid for James Maddison and Youri Tielemans.

Arsenal are not at the mercy of football's predators anymore. This time, selling can be a choice. There is quality across the Arsenal squad, they just lack any kind of balance. Is it such a bad idea, for example, to sell Alexandre Lacazette – a striker with four away goals last season, all against relegated teams – when you can reinvest that money into Wilfried Zaha and play Aubameyang up front alone?

If it was ever true that PSG offered £50m for Matteo Guendouzi, surely that buys you a desperately-needed defender? If Bayern Munich will present a treasure chest at Callum Hudson-Odoi's mesmeric feet, what are Arsenal's prospects worth? There are players, too, who could fetch respectable fees if they were sold by Liverpool or Chelsea – Nacho Monreal, Granit Xhaka, Alex Iwobi – yet none of them are even in danger of being upgraded.

OPINIONProject Youth 2.0: Why Arsenal's problems can be solved from within

With a glistening academy and talent across the field, things aren't apocalyptic for Arsenal. Their humble transfer budget can be boosted just by jettisoning a big name. Ramsey is a cautionary tale for the future – never again should a star be allowed to walk out the door without a fee in return. Arguably, it has been far more damaging than the Van Persie episode ever was.

Feeling like a big club is important to fans: it's the shot of whiskey that keeps us warm during a trophy drought. But there's more than one way to run a business. Selling isn't a sign of weakness. Letting your players leave for free is.