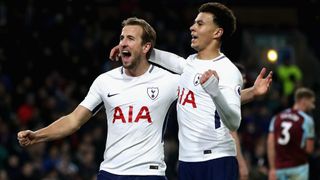 Dele Alli insists Tottenham have improved this season, despite them sitting outside the Premier League top four after 21 games.

Spurs made it three wins in a row with a 2-0 victory over Swansea City on Tuesday, a result that lifted them two points above Arsenal into fifth place.

Mauricio Pochettino's side finished as runners-up to champions Chelsea last season and came third in 2015-16, but a 22-point gap to leaders Manchester City means another title challenge this term looks to be beyond them.

Spurs, who entertain West Ham on Thursday, also face a battle to finish in the Champions League places, with Liverpool four points above them in fourth after playing a game more, but Alli does not believe the league table shows their progress this term.

"At the start of the year, we wanted to win the league," he told Sky Sports. "It was important to show we were improving. Maybe if you look at the stats it's different but, as a team, we're still improving, we're still learning about each other.

"Of course, we want to be in the top four but we can't get too drawn into the league and the table and what teams are doing around us. We just have to focus on ourselves and try to win every game."

Alli scored his side's second goal against Swansea to take his league tally for the season to five, the England international having also netted in the 5-2 win over Southampton on Boxing Day.

That strike ended a run of nearly two months without a league goal, but the 21-year-old thinks too much was made about the dip in his form.

"Every player has ups and downs; it's impossible to stay at one level throughout your career," he said. "I think I'm playing well.

"Of course, there have been games where I haven't played as well as I would have liked but, overall, I don't think there's too much to worry about. I'll keep working hard. I don't want to be as good as I was last year; I want to be better.

"It's important to stay confident; it's easy for your confidence to drop when you're not scoring goals, especially as an attacking player. People think if you're not scoring or assisting, you're playing badly but that's not always the case.

"There've been times when I've scored two goals in a game and probably had one of my worst games! It's frustrating when you're missing but you have to keep working hard and getting in positions. I know the quality I have so it's about showing it."