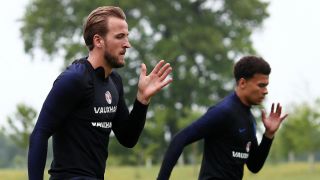 Tottenham players lack a winning mentality and will undermine England's hopes of going all the way at the World Cup, according to Tony Adams.

The ex-Arsenal defender, who captained his country at Euro 96, believes Gareth Southgate is misguided in his selection of a five-man Spurs contingent.

Star striker and incumbent skipper Harry Kane is among that group and has been open in his belief that England can defy expectations to compete with the favourites in Russia.

But Adams is concerned their lack of club success under Mauricio Pochettino will translate to the international stage.

"You must be able to handle winning emotionally and mentally and if they don't know how to win it, they aren't going to win it," Adams told The Sun.

"I'm really worried about these Tottenham players, I don't think they know how to win.

"They're very good players but at certain points in seasons and tournaments, you have to step up. There's a psyche players must have."

England open their World Cup campaign against Tunisia on June 18, prior to meetings with Panama and Belgium.