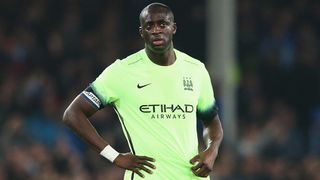 The Ivory Coast international has been questioned as City's form fluctuates, with Pellegrini's men having won just two of their past five matches.

Pellegrini believes criticism of the 32-year-old is sometimes unfair, but acknowledged the midfielder's relaxed body language did him no favours.

"Maybe it's more the image, the body language," he said.

"I said also last week that you review the numbers of Yaya after each game and he runs as much as every midfielder."

Pellegrini's men visit Norwich City in the FA Cup on Saturday and Toure may feature despite their busy schedule.

The Chilean said Toure, who has scored three goals in his past five games, deserved better than to be questioned over his form.

"It's difficult for the manager [to drop him] because he's a very good player. He's a player who makes the difference," Pellegrini said.

"Every time that maybe we don't have the score that we need or that we deserve, always you're saying 'What happened about Yaya?'

"Maybe against Everton [in the League Cup] he didn't play very, very well, but as every player, he has better or worse games.

"You cannot always talk about he doesn't run or because he's older, everyone can have a bad game."