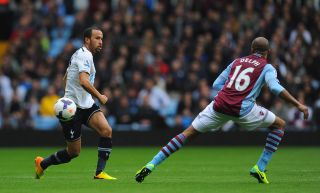 The 22-year-old scored for England on his senior international debut in the FIFA World Cup qualifier against Montenegro last Friday, before opening his Premier League account for his club in Sunday's 2-0 win over Aston Villa.

And Townsend admitted after the game at Villa Park that he is in dream land after a whirlwind fortnight.

"It's been one of the best few weeks of my life," he told Sky Sports.

"The main thing about today was getting back to winning ways after (the 3-0 defeat against) West Ham.

"Scoring for my country on my debut was the highlight (of my career) but scoring my first Premier League goal for my hometown club is up there."

Townsend broke the deadlock after 31 minutes when his inswinging delivery from the right found its way past Brad Guzan.

But he explained the difficulty he had coping with the pressing game of Paul Lambert's men, especially before the break.

"In the first half I had no space, there were always a couple of players around me and I ended up turning the ball over a couple of times," the 22-year-old continued.

"But in the second half, the game opened up and that's when I'm at my best.

"It's been amazing, but I can't get carried away, I have to keep my feet on the ground and my goal was a cross."