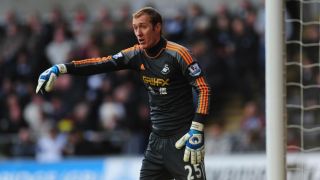 Veteran Swansea City goalkeeper Gerhard Tremmel has joined Bundesliga strugglers Werder Bremen on loan until the end of the season.

Tremmel originally joined Swansea in 2011 and was released at the end of last season before re-joining the club on a two-year deal in August.

However, the 37-year-old finds himself behind Lukasz Fabianski and Kristoffer Nordfeldt at the Liberty Stadium and has subsequently joined Werder on a temporary deal subject to international clearance.

Tremmel will add experience to a Werder side that have found the going tough in the Bundesliga this term and they are third bottom of the table, although Viktor Skrypnyk's side did pick up a morale-boosting 3-1 at Schalke on Sunday.

It marks a return to Germany for Tremmel, who has had spells with the likes of Hannover, Hertha Berlin and Energie Cottbus in his homeland.