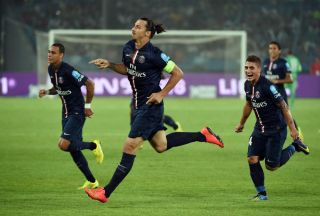 The Ligue 1 champions were always in command in a one-sided affair at the Workers Stadium in Beijing, dispatching the Coupe de France winners with little difficulty.

Once again it was Zlatan Ibrahimovic that was the star for Laurent Blanc's men, as the 32-year-old fired home a first-half double in another glowing exhibition of his talents in front of goal.

Guingamp spurned a chance to get back into the game in the 32nd minute with Mustapha Yatabare's penalty miss.

And the underdogs were left to rue that wasted opportunity as PSG comfortably saw out the game to add yet another trophy to their collection following consecutive league triumphs and last season's Coupe de la Ligue success.

The capital club will now turn their attentions to the Ligue 1 campaign, which they open on Friday at Reims.

PSG did all of the early pressing and needed just nine minutes to break the deadlock, Ibrahimovic finding the net in typically spectacular fashion.

The Sweden striker - captain in the absence of defender Thiago Silva - picked up the ball from Javier Pastore on the edge of area and unleashed a curling effort that left Guingamp goalkeeper Mamadou Samassa with no chance.

Guingamp then suffered a further blow as midfielder Julien Cardy was taken off on a stretcher and replaced by Rachid Alioui.

The problems continued to mount in a disastrous opening 20 minutes for the Brittany club, their misfortune encapsulated in the 19th minute when defender Lars Jacobsen was adjudged to have bundled over Jean-Christophe Bahebeck as they competed for a cross in the area.

Ibrahimovic stepped up and slotted the ball into the bottom corner, seemingly ending the game as a contest.

PSG were camped inside the Guingamp half for almost the entirety of the half and Bahebeck almost added a wonderful third, cleverly jinking his way down the right flank only to be denied by Samassa at the near post.

But Jocelyn Gourvennec's men were offered a lifeline on the half-hour mark as PSG centre-back Marquinhos conceded a penalty, referee Clement Turpin adjudging the Brazilian to have illegally blocked off Claudio Beauvue.

However, Yatabare - Guingamp's top scorer last season - could not keep his composure as his poor spot-kick was well saved by Salvatore Sirigu.

The second half was bereft of goalmouth action in comparison to the first, although PSG teenager Hervin Ongenda did fire wide five minutes after the interval.

Blanc's side took their foot off the gas somewhat in stifling conditions, but substitute Edinson Cavani should have made it three when he blazed over the crossbar following a superb through ball from Pastore.

But despite Cavani's profligacy, Guingamp were unable to mount a comeback as the gulf in class proved too much.