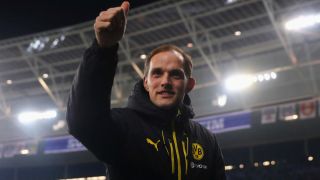 Unai Emery has hailed his Paris Saint-Germain successor Thomas Tuchel and believes the German is deserving of a chance to manage the Ligue 1 giants.

Emery will take charge of PSG for the final time on Saturday as they bring the curtain down on another hugely successful domestic season at Caen.

The Spaniard led PSG to the French treble but failure to achieve the club's main objective - success in the Champions League - means he will leave the Parc des Princes with Tuchel confirmed as his replacement.

In a short news conference ahead of the final-day clash at a Caen side still fighting to stay in the top flight, Emery said: "Tuchel is a great coach. He will find here many qualities in a club that wants to keep growing. He deserves this opportunity."

Even though it will be his swansong on Saturday, Emery is not planning a high-profile goodbye having received a send-off in Paris on Saturday following the defeat to Rennes.

He added: "There were already a lot of emotions last week with the Coupe de France [final win against Les Herbiers], and the last game at the Parc. That's why I'm smiling.

"I'm happy with what I've been through here. I'll go on my way.

"I have benefited from every practice, every game and on Saturday I just want to have a good 90 minutes."

Shortly after his briefing concluded, Emery, who has been linked with Arsenal and Chelsea, released a statement in which he thanked everyone at PSG for their support.

The statement read: "A page turns for PSG, me and my staff after two intense seasons from which we will remember many positive things: the first day that PSG contacted me, the meeting at which the president explained to me what he wanted from us, the presentation, the first day at the Parc with the supporters...

"Beyond the titles and the adventure that has lasted almost two years, it is the people I have met who will make the memories.

"That's why I can only thank all the Paris fans who have supported us since the first day, in the good and the bad times, the players we have worked with and that we have seen progress, and helped us progress, and all those who have shared the long days at Camp des Loges."