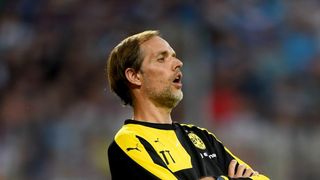 Borussia Dortmund coach Thomas Tuchel accepted that the rigours of a competitive 90 minutes caught up with his players in the 1-0 UEFA Europa League win at Wolfsberger.

Taking the reins for the first time since succeeding Jurgen Klopp, Tuchel watched Dortmund dominate for most of the first hour against their Austrian opponents, with Jonas Hofmann's 14th-minute strike separating the sides - despite strong claims for offside against Marco Reus during the build-up.

But the Bundelsiga outfit faded during the closing stages and were indebted to some last-ditch defending and goalkeeper Roman Burki for keeping Wolfsberger at bay.

Tuchel explained that the commitment shown by his players during training over recent days was likely to leave them short as the majority continue to work their way towards full match fitness.

"I am very happy with the result and the energy we showed in the pitch," he told Dortmund's official website.

"I anticipated, that it could get a bit rough after the intensity we had in training over the last couple of days.

"Apart from Mats Hummels, no player has played 90 minutes and it looked like that at the end.

"We defended the lead with passion and the necessary bit of luck.

"Perhaps it is even more important, a dirty victory, than the one where everything goes easily."