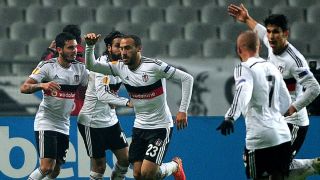 Besiktas returned to the top of the Turkish Super Lig after a dramatic stoppage-time strike from Cenk Tosun gave them a 2-1 victory over Karabukspor.

Slaven Bilic's side appeared to have thrown their chance away against the relegation strugglers as they entered added time level, but Tosun was their hero as he flicked home the winner in the 96th minute.

Atiba Hutchinson had given Besiktas the lead midway through the first half with only his second goal for the club but, after both sides had a man sent off, Karabukspor levelled through Musa Cagiran.

That looked to have earned a point, only for Tosun to snatch it, much to the frustration of Karabukspor coach Yilmaz Vural who was seen remonstrating with the officials at the final whistle.

Besiktas leap to the top ahead of Galatasaray on goal difference, while previous leaders Fenerbahce slip to third – a point back – after a 1-1 draw with Eskisehirspor.

Gala looked they would also be held by Gaziantepspor as their clash remained goalless with five minutes to play, but Hakan Balta fired a late winner to keep them firmly in contention.

The race for the final European place looks set for a thrilling climax as three sides sit level on 47 points with six games remaining.

Bursaspor occupy fourth position after a 4-1 win over Istanbul Basaksehir – who are now fifth – while Trabzonspor dropped points in a 1-1 draw with Genclerbirligi.

Relegation-threatened duo Balikesirspor and Kayseri Erciiyesspor drew 1-1, meaning there is just a point between them and third-bottom Karabukspor.

Rizespor remain seven points above the drop zone after a 3-1 defeat to Kasimpasa, while there was a 2-1 victory for Konyaspor over Akhisar Belediyespor.

And there was drama at Sivasspor as the hosts conceded two 90th-minute strikes to lose 2-1 against Mersin Idmanyurdu, Sinan Kaloglu and Marko Futacs on target for the visitors.