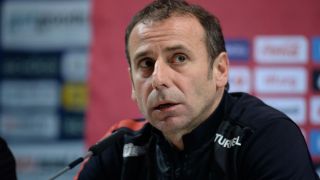 Istanbul Basaksehir secured European football for the first time in their history as a 2-2 draw at Mersin Idmanyurdu clinched fourth place in the Turkish Super Lig, while champions Galatasaray ended their campaign with a 1-1 tie at Rizespor.

Basaksehir went into Saturday's match two points ahead of their nearest challengers Bursaspor and needed to match their result at home to Konyaspor.

The capital club's efforts looked in danger of being for nothing just after the break, however, as quick-fire goals from former Spartak Moscow star Welliton and Oktay Delibalta opened up a 2-0 lead.

The away side battled back brilliantly, though, Doka Madureira pulling one back in the 79th minute, before Edin Visca ensured Basaksehir capitalised on Murat Ceylan's sending off, securing a point three minute from time and giving the club their highest-ever Super Lig finish.

Ultimately a defeat would have had no impact on their chances as Konyaspor held Bursaspor to a 0-0 draw, meaning Trabzonspor - who tied 1-1 with Sivasspor - finish fifth due to the head-to-head rule

Galatasaray brought their season to a close with a somewhat underwhelming 1-1 stalemate at lowly Rizespor, Umut Bulut firing a header into the net shortly after his 75th-minute introduction, salvaging a point despite Koray Gunter's sending off a few moments earlier.

Fenerbahce end the season trailing by three points after beating Kasimpasa 2-0, though it proved to be too little too late for Ismail Kartal's men, who surrendered the title last time out after having four men sent off at Basaksehir.

Already-relegated pair Kayseri Erciyesspor and Karabukspor played out the match of the round on Friday, the former emerging 4-3 winners thanks to a dramatic late turnaround, Orhan Gulle and Edinho scoring in the last 10 minutes to give the club a memorable way to end their top-flight spell.