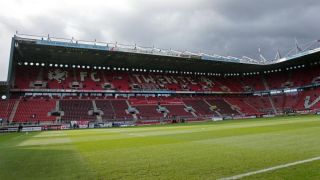 The Royal Netherlands Football Association (KNVB) has banned Twente from European competition for three years after the club was found guilty of "deliberately misleading" the organisation in regard to its relationship with Malta-based investment firm Doyen Sports.

The KNVB announced the punishment, which also includes a €45,250 fine and the revoking of the club's professional license unless it cooperates with an independent investigation into its structure, on Tuesday.

Eredivisie outfit Twente have been found guilty of supressing information about its collaboration with Doyen Sports, which has also worked with Atletico Madrid, Benfica, Porto, Sevilla and Valencia.

Twente have accepted the sanctions and will not file an appeal.

"The core of our football club is being hit hard," a club statement said.

"It hurts, not only for the players, but also our supporters, sponsors, staff, volunteers and all others who stand behind FC Twente."