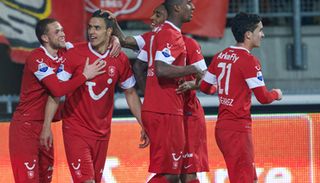 Twente will host Utrecht, who beat Heerenveen 3-1 on aggregate, on Thursday with the return next Sunday.

A long-range strike from Edson Braafheid put Twente ahead after 12 minutes but his own goal midway through the first half gifted Groningen an equaliser and the visitors struck again quickly to lead through Andraz Kirm.

Gutierrez headed home seven minutes from time to make it 2-2 and Chadli settled the match in stoppage time with a well-placed shot.

"We were surprised by their tactical plan playing with two strikers but after we fell behind we kept calm and played our own game," Twente coach Alfred Schreuder told reporters.

"And through the pressure we displayed we could make the difference at the end to clinch a deserved win."

In the relegation play-offs, VVV Venlo suffered a 3-0 home loss against Go Ahead Eagles Deventer to leave the Eredivisie after four seasons with a 4-0 aggregate defeat.

Go Ahead Eagles will face Volendam for a top flight spot, while in the other final Roda JC Kerkrade, 7-2 aggregate winners over Graafschap Doetinchem, take on Sparta Rotterdam.