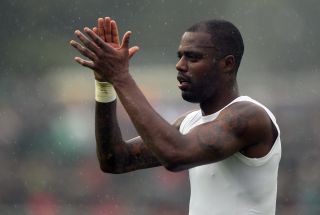 The league leaders extended their lead at the top of the table to six points with the comfortable victory in Dubai.

The visitors, who dropped to the bottom of the league as a result of their defeat, took the lead in the 19th minute through Luiz Henrique, only for Grafite to level before the break.

With the game drifting towards a draw Al Ahli netted twice in four minutes to secure the win. Ciel netted in the 86th minute and there was still time for Grafite to register a second.

Al Nasr moved level on points with two other sides in second place courtesy of a 4-3 win over Bani Yas.

Ibrahima Toure struck a hat-trick for Al Nasr with Eder Luis also getting himself on the scoresheet as his side moved on to nine points from five matches.

Goals from Haboush Salbukh, Luis Farina and Carlos Munoz kept Bani Yas in the game, but the hosts hung on despite Ali Hussain's late red card.

Al Shaab moved off the bottom of the league thanks to a 2-1 triumph against Al Shabab.

Ali Mohamed Bin Rubaya put the hosts ahead but Carlos Villanueva levelled on the stroke of half-time.

Julius Wobay grabbed the winning goal for Al Shaab in the 54th minute to seal their first win of the season.

Al Sharjah are fourth following a 2-1 victory over Dubai on Friday.

Dramane Traore appeared to have given Dubai three points with his 65th-minute opener, but goals in stoppage time from Ze Carlos and Fellype Gabriel secured a dramatic victory for Al Sharjah.

A hat-trick from Boris Kabi guided Ajman to their first win of the campaign - a 4-2 victory over Al Wasl.

Yousef Al Sulaiman put Ajman ahead midway through the first half, but it was Kabi's hat-trick that proved key in securing a much-needed three points.

Al Dhafra and Al Wahda both missed chances to move into the top three as they were held to 1-1 draws by Al Jazira and Al Ain respectively.