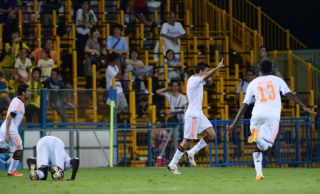 Cosmin Olaroiu's won their opening seven games and looked set for another triumph when Ciel handed them the lead with just 12 minutes gone.

But the hosts responded within two minutes through Mauricio Ramos and battled hard to earn a point.

That made Al Shabab's 3-0 victory over Dubai on Thursday all the more valuable, as they closed the gap at the top to four points.

Edgar Silva netted a brace to take his tally to nine for the campaign, before Azizbek Haydarov put the result beyond doubt with three minutes left.

There were also wins for top-five sides Bani Yas and Al Ain, with the former completing an impressive 4-0 rout over Al Shaab thanks to a hat-trick from 24-year-old Carlos Munoz.

Quique Sanchez Flores' were also convincing winners, completing a 5-2 home rout of Emirates coming after the travelling side tried to forge a comeback after a second-half brace from German Herrera.

His efforts were matched by Asamoah Gyan, however, whose double added to goals from Michel Bastos, Mohaned Salem and Alex Brosque to seal the emphatic win.