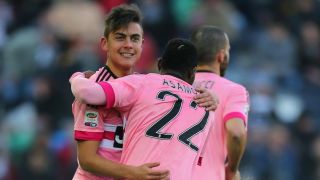 Udinese had shocked the Serie A champions 1-0 in August's reverse fixture and were hoping for a repeat in Sunday's encounter, which marked the first since renovation work was completed at their home stadium.

But from the moment Dybala scored with a 15th-minute free-kick, there was only ever going to be one winner.

Sami Khedira scored for the second match running with a simple header before Danilo was sent off for a last-man challenge on Mario Mandzukic, allowing Dybala to make it 3-0 from the penalty spot - his 11th league goal of the season.

A fine individual goal from Alex Sandro made it 4-0 before the end of the opening period and, although they took their foot off the gas somewhat after the interval,  Juve easily racked up a 10th consecutive Serie A win to pull away from Inter in second place and keep the heat on league leaders Napoli.

Keen to quell a loud, sold-out home crowd, Juve tested the water when Mandzukic failed to make clean contact with an acrobatic effort from Giorgio Chiellini's knock down.

And the visitors were in front in the 15th minute thanks to Dybala's perfectly executed free-kick into the bottom left-hand corner that left Orestis Karnezis flat-footed.

Just three minutes later, a right-flank corner was only part-cleared and Dybala headed across the face of goal, where the unmarked Khedira nodded into the open net.

Udinese began to completely unravel and Danilo was shown his marching orders for chopping down Mandzukic when one-on-one with Karnezis and Dybala coolly slotted the resulting penalty into the bottom left-hand corner.

The pick of the goals came three minutes before the break as left-back Alex Sandro cut in on his right foot and curled a brilliant effort into the far corner.

Karnezis made fine stops from Khedira and Kwadwo Asamoah to keep it at 4-0 before the break, and Dybala was let down by an uncharacteristic poor first touch when picked out by Mandzukic just shy of the hour.

The hosts had little to cheer, but veteran Antonio Di Natale was afforded a warm round of applause - including from several visiting players - when replaced by Duvan Zapata in what is likely to be his last game against Juve.

With the game won, Juve opted to take off Dybala and his replacement Alvaro Morata forced Karnezis into a smart stop low to his left.

Udinese almost grabbed a consolation when Francesco Lodi's free-kick was brilliantly tipped onto the post by Gianluigi Buffon.

But Juve were largely comfortable in the closing stages and Massimiliano Allegri's men can now prepare for a tricky week that seems them visit Lazio in the Coppa Italia before hosting Roma in Serie A.