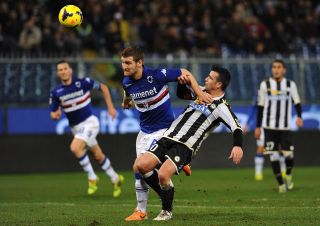 In a dramatic Serie A clash at the Stadio Comunale Luigi Ferraris in Genoa, referee Paolo Mazzoleni sent off three players with the visitors ending the game with nine men, while Sampdoria completed the match with 10.

A penalty in the 16th minute to Sampdoria forward Eder gave the hosts a 1-0 advantage before Udinese lost defensive midfielder Allan to a second yellow card just after the half-hour mark.

But Bortoluzzi has argued Udinese were still in the contest until Eder scored his second goal two minutes into the second half.

"We … reorganised (after the penalty) but the expulsion of Allan was the second blow," Bortoluzzi said.

"Then the opening goal in the second half has definitely put us on our knees, making the game even more complicated."

In all, referee Mazzoleni dished out 12 yellow cards for the match, with Allan, Soriano and Silva all receiving two, and Udinese defender Thomas Heurtaux claimed his team were given no leeway by the official.

"When we did foul, the referee has always given us the yellow," the Frenchman said.

"This put us in a lot of trouble.

"(But we must) close this bracket and go back to work to make a great match against Lazio.

"I have confidence in this team because we have quality but we need to find consistency."

Meanwhile, Sampdoria head coach Sinisa Mihajlovic refused to 'settle' despite watching his team overcome Udinese, extending his record since joining the club to three wins and three draws from seven Serie A fixtures.

"I do not think it's the perfect match, because the perfect game does not exist; you can always do better," the Serb said.

"Some things can be improved, even if we did well.

"We started strong, we have pressed high and we kept the ball. Then the three goals and many chances but I will not settle."