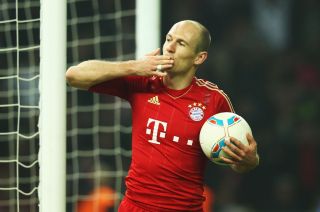 The Dutchman has scored in Bayern's last five Champions League fixtures, a streak that includes their 2-1 win over Borussia Dortmund in the 2012-13 final at Wembley in May.

Only three players in the history of Europe's premier club competition have scored in six successive fixtures and Robben will aim to join Marouane Chamakh, Burak Yilmaz and Cristiano Ronaldo in achieving the feat.

The reigning champions will enter their Group D home game against the Czechs as heavy favourites after their superb start to the season.

Bayern top the Bundesliga with seven victories from nine matches and have easily won both of their Champions League fixtures, particularly impressing in a 3-1 win at Manchester City earlier this month.

The Bavarian giants have scored in their last 31 games and survived a scare to defeat Mainz 4-1 on Saturday.

Bayern's 33-match unbeaten streak in the Bundesliga came under threat when Shawn Parker's goal helped Mainz to the lead at the break.

However, Mario Gotze came on at half-time and helped to change the match, as two goals from Thomas Muller and additional strikes from Robben and Mario Mandzukic carried Pep Guardiola's side to victory.

Winger Franck Ribery was rested as a precaution, but the Frenchman is likely to be fit for Wednesday's clash.

"It's nothing serious. I wanted to play, but the doctor said it was too much of a risk," Robben said.

Brazil defender Dante was substituted in the win over Mainz with an ankle injury and will be out at least a fortnight. Thiago Alcantara also has an ankle problem and is unavailable together with fellow midfielder Xherdan Shaqiri (hamstring).

Defender Jerome Boateng is suspended following his red card in Manchester and although midfielder Javi Martinez has returned to training following groin surgery, Wednesday's match will come too soon for him.

Viktoria Plzen sit second in the Czech top flight, six points behind Sparta Prague but undefeated in their 11 league matches this season.

Plzen have lost each of their Champions League fixtures, succumbing to a 3-0 home defeat against Manchester City before CSKA Moscow beat them 3-2 earlier this month.

Centre-back Marian Cisovsky missed both of those defeats due to a calf injury but returned in Saturday's 1-1 draw with Sparta Prague.

David Limbersky, another member of Plzen’s defence, has not played in almost a month due to a thigh injury and is set to miss out again.