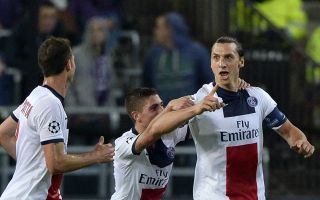 The Swede netted four times - becoming the fourth man to do so in the competition - with his first three coming in the first-half as PSG dominated.

Ibrahimovic’s hat-trick goal was the pick of the bunch as the striker latched onto a loose ball 33 yards from goal and sent an unstoppable first-time strike curling into the top-left corner.

Edinson Cavani added to his side's lead early in the second half and Ibrahimovic smashed home his fourth just after the hour to wrap up PSG’s third consecutive victory in Group C.

Laurent Blanc named the same side that defeated Benfica in their last group game, meaning there were six changes from the comprehensive victory over Bastia in Ligue 1 at the weekend.

Anderlecht recalled two experienced midfielders - captain Guillaume Gillet and Sacha Kljestan - after both were rested for their league match against Mons on Friday.

A scrappy start to the game saw the hosts waste some early openings, and they were punished in the 17th minute as Ibrahimovic escaped his marker to put PSG ahead.

The Sweden international peeled away to the back post and ensured he was perfectly placed to meet a low cross from Gregory van der Wiel.

The Dutch full-back raced down the right-hand side and fired another low cross into the penalty area, this time to the near post. Ibrahimovic got in front of his marker on the edge of the six-yard box and flicked the ball beyond Thomas Kaminski.

Ibrahimovic then completed his hat-trick in the 36th minute with an outstanding long-range strike. Anderlecht cleared a left-wing cross but it dropped perfectly for the 32-year-old and he sent a powerful shot into the top-left corner - giving Kaminski no chance.

The visitors were gifted their fourth goal seven minutes into the second half as Blaise Matuidi robbed Chancel Mbemba after the defender had slipped inside the penalty area. The midfielder rolled the ball into the unmarked Cavani and the Uruguayan made no mistake from six yards.

In the 62nd minute Ibrahimovic netted his fourth as the visitors exposed Anderlecht’s rigid defending on a blistering counter-attack. Marco Veratti lifted a pass into the path of the striker, who controlled the ball instantly and lashed it beyond Kaminski and in off the far post.

Ibrahimovic had a chance to grab a fifth late on but his audacious lob had just too much on it and dropped on top of the goal with Kaminski stranded.