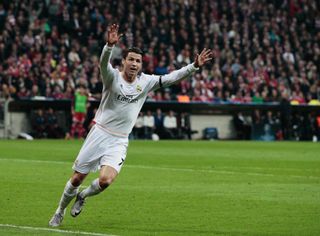 The Spanish side produced a magnificent display at the Allianz Arena on Tuesday to bring Bayern's title defence to an emphatic end with a 5-0 aggregate victory.

Real - who beat Bayer Leverkusen in their last final appearance 12 years ago - took a giant step towards a long-awaited 10th success in Europe's premier club competition courtesy of braces from Sergio Ramos and Cristiano Ronaldo.

Leading 1-0 from last week's first leg, Ramos' early double put Real in control of the tie, before Ronaldo settled the tie in the 34th minute with a strike that broke the record for most Champions League goals in a season.

Ronaldo made it 15 goals in 10 Champions League appearances this term by rounding off an excellent Real counter-attack, and then added the finishing touch with a fine free-kick in the closing stages.

Real will now face Chelsea or city rivals Atletico Madrid in next month's final in Lisbon, and their hopes of a treble in Carlo Ancelotti's first season at the Bernabeu remain very much alive.

The only disappointment from a wonderful evening for Real came in the 38th minute, as playmaker Xabi Alonso was booked for a rash tackle on Bastian Schweinsteiger, meaning he will miss the final.

Bayern goalkeeper Manuel Neuer presented Real with an early opportunity as his clearance from a ball over the top went straight into the path of Gareth Bale - restored to the starting XI after illness - however, the Welshman could only fire high over the crossbar.

But it did not take long for Ancelotti's men to make the crucial breakthrough, which came in the 16th minute when the unmarked Ramos met Luka Modric's perfectly placed corner with a bullet header.

And just four minutes later, Real doubled that advantage to take control of the tie as Pepe flicked Angel di Maria's right-wing free-kick towards Ramos, who netted his second goal of the game with a diving header.

Bayern did finally threaten the Real goal midway through the first half, Franck Ribery flashing an effort across the face of goal, but the visitors’ threat on the counter was perfectly illustrated shortly after by a fine break from Ronaldo, although the Portuguese could only fire wide from the edge of the area.

The hosts failed to heed the warning offered by Ronaldo, though, and he duly netted his milestone goal by coolly finishing off a scintillating move that saw Bale charge through the heart of the Bayern defence before laying the ball off for the 29-year-old.

Ronaldo then went close with an audacious effort from 40 yards following another botched Neuer clearance.

Bayern were allowed more of the ball following the restart but struggled to break down a determined and organised Real defence.

Arjen Robben curled an effort narrowly wide from the edge of the area, before Toni Kross lashed a decent effort just over the bar.

However, a miserable night for Bayern coach Pep Guardiola was capped off in the 90th minute, as Ronaldo drove a low 20-yard free-kick under the wall for his 16th Champions League goal of the campaign that ends Bayern's chances of winning a second straight treble.