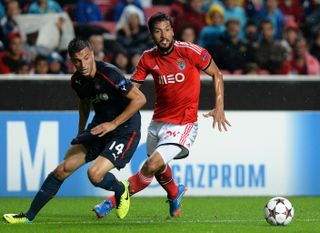 Alejandro Dominguez put the visitors ahead after 29 minutes, before a torrential downpour and the resulting water-logged pitch killed the pace of the game in the second period.

However, with hope fading for the Portuguese side, Cardozo was in the right place at the right time to prod home from close range seven minutes from time.

Jorge Jesus rung the changes after an under-strength Benfica outfit scraped past third-tier Cinfaes 1-0 in the Taca de Portugal third round on Saturday.

Visiting goalkeeper Roberto was called into action in the opening minutes of the rain-drenched encounter as Oscar Cardozo curled a low free-kick around the wall from 20 yards, only to see the Spanish stopper push the effort to safety.

With both sides looking to attack from the off at the Estadio da Luz, the venue for this season's final, Kostas Mitroglou got ahead of his man in the penalty area after 10 minutes to meet a David Fuster cross from the right, but he failed to find the target with a close-range header.

An end-to-end first half continued to throw up chances for both teams – Benfica's Lima firing straight at Roberto after being sent through one on one, although the Brazilian had already been flagged for offside.

But it was Olympiacos who broke the deadlock in the 29th minute when Dominguez received the ball from Mitroglou 20 yards out, cut inside to beat an already committed Ezequiel Garay and curled an effort beyond Artur into the bottom right-hand corner of the net.

The torrential downpour continued through the half-time break and the amount of standing water on the pitch at the start of the second 45 minutes made for a treacherous playing surface.

Lima sent a free-kick narrowly wide of the right post four minutes into the half as conditions deteriorated quickly, with the ball barely moving along the sodden turf.

The hosts had a shout for a penalty after 56 minutes as Guilherme Siqueira felt he was obstructed by N’Dinga, but the referee waved play on.

Moments later at the other end, Fuster slotted the ball beyond Artur, only to be denied by a puddle in the penalty area, which brought his effort to a premature halt.

But it was Cardozo who would have the last word two minutes later – prodding home from just a couple of yards in the aftermath of a Rodrigo corner.