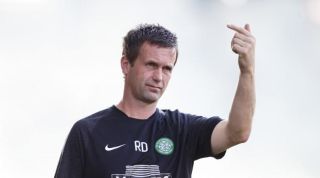 The Scottish champions lost their third qualifying round tie 6-1 to Legia Warsaw, only to be reinstated after their opponents were found to have played an ineligible player in the second leg.

That meant UEFA overturned Legia's 2-0 win and handed Celtic a 3-0 'walkover' win - enough to see them progress to the two-legged play-offs on away goals.

The issue has rumbled on ever since, with Legia first asking Celtic for a one-off winner-takes-all match before appealing UEFA and then the Court of Arbitration for Sport to reverse their decision.

With Celtic again heavy favourites to win the Scottish Premiership in the absence of Rangers - who are in the second tier - the Champions League is of huge importance to the club and they will be determined to make the most of their good fortune in Slovenia.

With spots in the group stages of Europe's premier club competition up for grabs in the 10 two-legged play-off ties, Celtic will hope they have caught Maribor at the right time.

They slipped to a surprise 3-1 defeat against Celje on Saturday, while Celtic thrashed Dundee United 6-1.

Celtic manager Ronny Delia said ahead of Tuesday's clash: "I'm always optimistic but we have to keep on working hard and believe in what we're doing.

"It's going to be a very important game. I hope we get a good result so we can fill Celtic Park and go through."

While Celtic's participation in the competition has dominated headlines, the likes of Arsenal, Porto, Napoli and Bayer Leverkusen are also in play-off action.

Arsenal, attempting to reach the competition proper for the 17th successive season, play their first leg against Besiktas in Turkey on Tuesday.

Arsene Wenger's men - who made the Champions League final in 2006 - were scrappy in a 2-1 Premier League win over Crystal Palace on Saturday and midfielder Aaron Ramsey, who bagged a last-gasp winner, knows his side need to get better.

"[New signing] Alexis [Sanchez] showed glimpses of his quality and he's very quick on the turn but he's part of the team and the team struggled to get going…we'll be looking to improve that on Tuesday," Ramsey told Arsenal's official website.

Leverkusen, finalists in 2002, hit the road to take on FC Copenhagen buoyed by a 6-0 DFB Pokal win against Alemannia Waldalgesheim on Friday in which Stefan Kiessling scored five times.