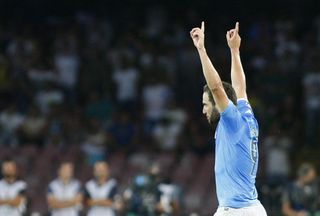 Athletic took the lead at Stadio San Paolo on Tuesday shortly before half-time when Iker Muniain rounded off a well-worked move by side-footing home from the edge of the penalty box.

However, Rafael Benitez's Napoli levelled in the 68th minute, Higuain making it nine goals in 11 appearances against the Spanish side when he trapped Marek Hamsik's ball on the edge of the area and drilled a low shot into the bottom left-hand corner.

Jose Callejon should have made it 2-1 shortly after, but he placed wide of the post after breaking into the area, meaning Napoli will have to score in next week's return leg at Estadio San Mames to progress.

Ten-man Arsenal came agonisingly close to snatching a late winner at Besiktas, but goalkeeper Tolga Zengin tipped Alex Oxlade-Chamberlain's shot onto the post three minutes from time as the sides battled out a goalless stalemate.

Demba Ba was also denied by the woodwork, straight from the kick-off, on a night when Aaron Ramsey picked up the first red card of his Arsenal career following two bookings.

In Denmark, German side Bayer Leverkusen defeated FC Copenhagen 3-2 in an entertaining contest, with all five goals coming in the first half.

Stefan Kiessling scored five goals in Leverkusen's 6-0 beating of Alemannia Waldalgesheim in the DFB-Pokal on Friday, and he swept home the opener in the fifth minute.

However, Mathias Jorgensen and Daniel Amartey netted in the space of four first-half minutes to put the hosts ahead by the 13th minute.

Leverkusen did not panic, though, and Karim Bellarabi levelled just after the half-hour mark before Son Heung-min slid home the winner three minutes before the break.