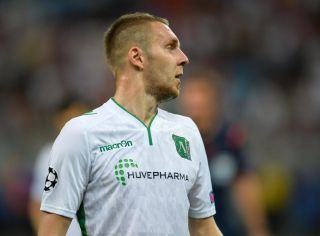 Ten-man Arsenal reached the competition proper for the 17th successive season on Wednesday as the Premier League side defeated Besiktas 1-0 at the Emirates Stadium to progress by the same score on aggregate.

Alexis Sanchez, who has struggled to hit top form since his big-money move from Barcelona, calmed Arsenal's nerves on the stroke of half-time when Nacho Monreal's through-ball went through Jack Wilshere's legs to leave the Chilean with a simple finish.

Mathieu Debuchy was shown a second yellow card and subsequent red in the 76th minute to ensure a nervy ending, but some dogged Arsenal defending helped Arsene Wenger's men into Thursday's draw.

At the Stadion Vasil Levski, defender Moti was the name on the lips of Ludogorets supporters as they defeated Steaua Bucharest 6-5 in a penalty shootout.

The Bulgarians forced spot-kicks by winning 1-0 on the night, but were up against it when goalkeeper Vladislav Stoyanov was sent off in the 119th minute for a second bookable offence.

Moti took the gloves and, after scoring Ludogorets' first penalty, saved Paul Pirvulescu's effort after Wanderson had missed for the hosts.

With sudden death needed, Coti then made the crucial stop from Cornel Rapa's spot-kick and duly raced to the home supporters to partake in wild celebrations.

Joining them in the group-stage draw are Bundesliga outfit Bayer Leverkusen, who coasted past Copenhagen 4-0 at the Bay Arena to secure a 7-2 aggregate victory.

Leverkusen had effectively the put the tie to bed within the opening seven minutes as first Son Heung-min applied a cool finish from close range before Hakan Calhanoglu's free-kick deflected home via the arm of Danny Amankwaa.

Amankwaa's evening went from bad to worse when he conceded a penalty for a foul on Tin Jedvaj on the half-hour mark and Stefan Kiessling confidently dispatched the spot-kick. The in-form forward then scored his second of the game in the 66th minute.

However, Napoli's participation in the competition came to an abrupt end as they were beaten 4-2 over two legs by Athletic Bilbao after losing 3-1 to the Liga outfit on the night.

Napoli were aiming for a third straight appearance in the group stages and appeared well on course when Marek Hamsik opened the scoring just after half-time by drilling home a left-foot shot that hit the upright before nestling in the goal.

Athletic roared back, though, and Aritz Aduriz scored twice in seven second-half minutes to swing the tie in the Liga side's favour.

Ibai Gomez then capitalised on confusion in the Napoli box to make it 3-1 in the 74th minute and sent Athletic to the group stages for the first time since the 1998-99 campaign.

Elsewhere, Malmo overturned a 2-1 deficit from the first leg by beating Salzburg 3-0 at the Swedbank Stadion.