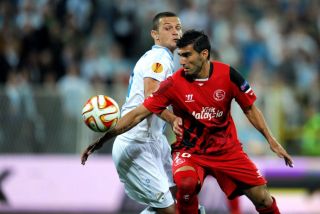 Sevilla sit second in the group's table with eight points, which would be enough to send them into the Europa League knockout stages, but the La Liga outfit host third-placed Rijeka (seven points), who will leapfrog the holders with a win.

In fact, Rijeka could finish top of the group's standings if they win in Spain and leaders Feyenoord lose at Standard Liege.

Feyenoord are guaranteed to progress, however, as they can only be passed by one of Sevilla and Rijeka on the final matchday of the group stage.

At the start of October, Sevilla needed an equaliser from Stephane M'Bia in the first minute of second-half stoppage time to secure a 2-2 draw at Rijeka's home ground, and the Spanish club's coach Unai Emery is under no illusions of the task facing his team.

"[Rijeka is] a good team and will be a very important game for us," the 43-year-old said after Sevilla's 1-0 win over Rayo Vallecano on Sunday.

For Rijeka to overhaul Emery's team, however, the Croatian club will have to end their winless streak away from home in the Europa League proper, which is at five matches.

In Group A, any combination of the top three clubs could progress with leaders Borussia Monchengladbach still not safe ahead of their clash with Zurich.

Gladbach (nine points) could be passed by both third-placed Zurich (seven) and Villarreal, who sit second on eight points ahead of their trip to Apollon (three).

It is essentially the same situation in Group B with leaders Club Brugge hosting third-placed HJK, while second-placed Torino visit bottom club Copenhagen.

Premier League club Tottenham can wrap up top spot in Group C with a win at second-placed Besiktas, while Partizan will host Asteras Tripolis with neither club in the running for the knockout stages.

Salzburg and Celtic have first and second spot sorted in Group D ahead of Thursday's respective clashes against Astra and Dinamo Zagreb, while in Group E, Dinamo Moscow will look to maintain their perfect run when they visit PSV, who cannot lose second spot, with Estoril taking on Panathinaikos in the other fixture.

Azerbaijan's Qarabag - in their first Europa League group stage - have a chance to advance from Group F.

Qarabag (five points) sit ahead of third-placed Saint-Etienne due to a superior head-to-head record but will need to at least match the French club's result on Thursday to progress.

The Azerbaijanis will host leaders Inter, while Saint-Etienne, who have drawn all five group matches to date, travel to Dnipro Dnipropetrovsk.

Everton will host Krasnodar in Group H, while Lille have a slim chance of progression ahead of their clash with Wolfsburg, while in Group I Napoli take on Slovan Bratislava and Young Boys welcome Sparta Prague to Switzerland.