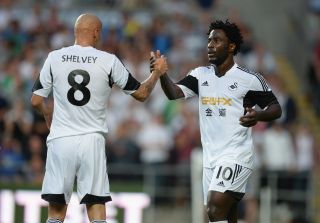 The Welsh side are yet to concede in the competition, having beaten Malmo 4-0 over two legs in the previous round, and will face a tough test in the first leg against Petrolul, who knocked out Vitesse in the last stage.

If Michael Laudrup's men are to build on their impressive debut in the competition, they will need to recover quickly from Saturday's defeat to Manchester United in the Premier League.

Swansea were beaten 4-1 at home by the English champions and goalkeeper Michel Vorm has called for focus from his team-mates.

The Dutchman believes that his side must improve from Saturday's showing if they are to get past their Romanian opponents and qualify for the group stages.

"This (the Manchester United game) was a disappointing result for us, but we have to move on," he told the club's official website.

"It’s great that we have a game so quickly – particularly at home.

"Hopefully we can bounce back straight away. That would be a boost for us because we have a tough game at Spurs a few days after that."

Swansea will be without Jonathan de Guzman for the clash, with the Dutchman not having recovered from the concussion that he suffered while on international duty.

Ivorian Wilfried Bony is likely to feature against Cosmin Contra's men, with the in-form striker having scored twice against Malmo and once against United.

Contra saw his side maintain their unbeaten league run on Saturday as they drew 1-1 with Ceahlaul Piatra Neamt in Liga 1.

Petrolul have drawn three and won two of their five domestic games so far - having also successfully negotiated two rounds of their first European competition since 1990-91.

After dispatching Vikingur 7-0 on aggregate, they edged past Peter Bosz's Vitesse 3-2, thanks to a 90th-minute Gheorghe Grozav goal.

Grozav is his side's top scorer in this year's competition and his goalscoring exploits are likely to be needed again if Petrolul are to progress.

Prior to the Manchester United defeat, Swansea kept clean sheets twice against Malmo as well as in all seven of their pre-season friendlies.