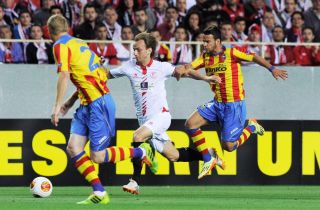 The Sevilla head coach spent four years at Valencia before he departed in June 2012, but there was little room for sentiment on Thursday as his current side showed no mercy at the Estadio Ramon Sanchez Pizjuan and now stand on the brink of reaching next month's final in Turin.

Stephane M'Bia and Carlos Bacca struck within three first-half minutes to maintain Sevilla's standing as the top scorers in this season's competition.

Valencia slowly came into the game, but lacked a focal point in attack that enabled their La Liga rivals to record a valuable clean sheet, although only after Eduardo Vargas rattled the crossbar late on.

The victory was Sevilla's first over Valencia this season, but Emery will not be getting too carried away with the result heading into next week's second leg as their opponents came from 3-0 down in their quarter-final tie with Basel to progress.

A lively opening 15 minutes saw both teams enjoy periods of possession, with the hosts showing good pace in attack, but it was Valencia who had the better sight of goal as Paco Alcacer's long-range effort was pushed away by Beto.

It took until the 27th minute before Sevilla threatened the Valencia goal again as Federico Fazio and Bacca both fired just wide of Vicente Guaita's goal.

Sevilla made their pressure pay in the 33rd minute as M'Bia opened the scoring amid controversial scenes.

Ivan Rakitic's free-kick was flicked on by Daniel Carrico to the Cameroon international at the back post, who, despite being in an offside position, initially miscontrolled the ball before back-heeling it into the net.

Three minutes later, Sevilla doubled their lead as Bacca converted at the third time of asking.

The Colombia striker exchanged passes with Vitolo on the edge of the penalty area before firing low past Guaita and into the bottom corner.

Fazio should have made it 3-0 just before the break as he met another Rakitic free-kick, but the unmarked defender saw Guaita get down well to save.

Rakitic continued to shine in midfield at the start of the second period and created further chances for Fazio and Bacca, only for Guaita to make two more saves to keep his side in the tie.

Valencia burst into life just after the hour with Sofiane Feghouli and Vargas at the forefront of their good play, and the latter went close to halving the deficit with a curling effort that flew just wide.

Juan Antonio Pizzi's men continued to search for an away goal and saw two fantastic chances go begging late on.

First, Beto saved from point-blank range to deny substitute Jonas and then Vargas hit the bar with a back-post header.