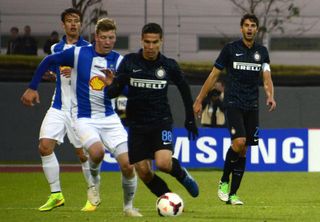 Walter Mazzarri's men had too much class for their opponents in Reykjavik, with goals to Mauro Icardi and Dodo either side of half-time building an imposing lead for the Italians before Danilo D'Ambrosio added a third late on.

The visitors were rewarded for their first-half dominance at the Laugardalsvollur when Icardi finished off a dinked cross in from Dodo - with the Stjarnan defence unable to deal with it.

Dodo then doubled Inter's lead shortly after the interval, nodding home Jonathan's cross at the far post - and D'Ambrosio capped a complete performance in the 89th minute.

Dodo and Icardi earlier combined to create the first chance of the game in the third minute, with the former's corner finding the Argentine in the area – but his header went high over the crossbar.

Inter were building pressure and plenty of corners followed, although the hosts held firm - and even got off a shot on target of their own via American midfielder Pablo Punyed in the 11th minute, but it did not trouble goalkeeper Samir Handanovic.

Dodo and Mateo Kovacic were dangerous creators throughout the opening period, before the former provided for Icardi, who duly converted to give Inter the advantage.

Making his competitive debut for the club, Dani Osvaldo hit the woodwork late on after coming on as a second-half substitute, before D'Ambrosio smashed a ball home into the roof of the net after Zdravko Kuzmanovic played him through.

Inter will host the Icelandic club in the second leg on August 28, with one foot in the group stages.

Dnipro, who currently sit second in the Ukrainian Premier League after winning all four games of the season so far, are aiming to reach the group stage of the competition for the third successive season.

But it was the Croatian visitors who took the lead through a Tino-Sven Susic strike three minutes after the break.

That lead did not last long, however, and the hosts were soon level when former Blackburn Rovers forward Nikola Kalinic dispatched in the 50th minute.

Hajduk held firm from there and thought they had done enough to claim a 1-1 draw, but Shakhov finally put the two-time Ukrainian champions ahead in the 88th minute.