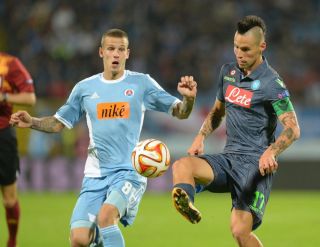 The Serie A trio each made it two wins from two to hold an early advantage in their respective groups.

Inter bounced back from Sunday's chastening 4-1 home loss to Cagliari, Danilo D'Ambrosio and Mauro Icardi scoring a goal in each half to see off the spirited challenge of Azerbaijani champions Qarabag 2-0 in Group F.

Qarabag now face back-to-back matches against Dnipro, who got their first point of the competition on the board via a 0-0 draw with Saint-Etienne, who are second and four points behind Inter heading into matchday three.

Fiorentina followed up their opening 3-0 triumph over Saint-Etienne's Ligue 1 counterparts Guingamp by recording the same scoreline at Dinamo Minsk - Alberto Aquilani breaking the deadlock after 33 minutes in the Group K clash before goals to Josip Ilicic and Federico Bernardeschi made the points safe.

Guingamp got up and running as Sylvain Marveaux ended nine games without a goal this term by scoring a brace in a 2-0 victory at home to PAOK.

Napoli's Slovakian playmaker Marek Hamsik celebrated a return to his homeland by scoring and teeing up substitute Gonzalo Higuain in the 2-0 triumph over Slovan Bratislava.

Slovan remain point-less and three points behind both Sparta Prague and Young Boys, with the Czech side sealing a 3-1 home win the Swiss outfit.

Portuguese side Estoril are level on three points with PSV after condemning Panathinaikos to consecutive defeats, winning 2-0.

Yarmolenko scored in the 40th minute before turning provider for Artem Kravets and Lukasz Teodorczyk.

Aalborg bounced back from their matchday one thrashing at the hands of Steaua Bucharest, as Nicklas Helenius headed the winner in their 1-0 victory over Rio Ave.

In Group L's other match, Belgium's Lokeren were also 1-0 winners over Metalist Kharkiv.

Kevin De Bruyne smashed the goal of the night, an unstoppable long-range volley as Wolfsburg drew 1-1 at home to Lille.

Tottenham drew 1-1 with Besiktas in Group C, meaning both sides have two points.

Demba Ba marked his return to England with an 89th-minute penalty that cancelled out Harry Kane's well-taken opener.

Asteras Tripolis are the surprise leaders at this stage after Fernando Usero and Facundo Parra scored either side of the break to sink Partizan Belgrade 2-0.

Celtic and Salzburg have four points each at the head of Group D, having beaten Dinamo Zagreb and Astra respectively.

The Scottish champions have endured a dismal European season to date, but Kris Commons netted early before goalkeeper Craig Gordon starred to preserve a 1-0 scoreline at Parkhead.

Villarreal were comprehensive 4-0 winners over Apollon Limassol in Group A, leapfrogging the Cypriot side courtesy of braces from Gerard Moreno and Javier Espinosa.

Sevilla are top of Group G after Stephane Mbia volleyed home in injury time to earn a 2-2 draw at Rijeka.

Feyenoord chalked up a 2-1 victory over Standard Liege thanks to Elvis Manu's winner six minutes from time.

Torino and Club Brugge have four points each in Group B thanks to wins against Copenhagen 1-0 and HJK Helsinki 3-0 respectively.