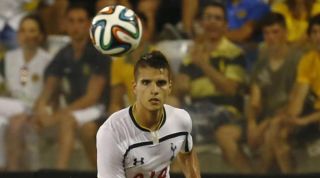 Adrian Sardinero gave AEL a deserved lead in the first half at Antonis Papadopoulos Stadium, but Spurs battled back in the final 20 minutes as Erik Lamela set up Roberto Soldado and Harry Kane to give them the edge ahead of the second leg.

Ten-man Lyon had no such luck, though.

Steed Malbranque's 25th-minute opener gave them an encouraging start, but Kehinde Fatai levelled for the Romanians in the 72nd minute and Lindsay Rose received a costly second yellow card a few minutes later.

Constantin Budescu fired in a penalty in the final 10 minutes to earn a precious away win, while the other French side in action – Saint-Etienne – were also defeated, as they lost 1-0 at Karabukspor.

Villarreal cruised to a 3-0 win away from home, as they comfortably defeated 10-man Kazakhstani side Astana thanks to goals from Cani, Giovani dos Santos and Mario Gaspar.

Real Sociedad, the other Spanish side in action, claimed a slender 1-0 home victory over Krasnodar of Russia.

The other three Russian sides competing fared a little better, but none were able to win.

Dinamo Moscow were held to a 2-2 home draw to Omonia Nicosia, while Rostov lost 2-0 at Trabzonspor and Lokomotiv Moscow's trip to Apollon ended 1-1.

PSV could only muster a slender 1-0 win at home to Shakhtyor of Belarus, while fellow Eredivisie sides PEC Zwolle, Twente and Feyenoord all drew.

Zwolle and Feyenoord were held to 1-1 stalemates by Sparta Prague and Zorya respectively, while Twente endured a goalless match at Qarabag of Uzbekistan.

Dinamo Zagreb have given themselves a good chance of reaching the group stage after beating hosts Petrolul Ploiesti 3-1, while Zurich's Amine Chermiti netted a hat-trick as the Swiss club downed Spartak Trnava 3-1.

It was mostly an encouraging night for the Greek sides involved as Panathinaikos thrashed Midtjylland 4-1 and Asteras Tripolis were 2-0 victors over visitors Maccabi Tel Aviv, but PAOK succumbed to a 1-0 loss to Zimbru in Moldova.

Both Belgian clubs came away with wins as Lokeren clinched a commendable 1-0 triumph against Hull City and Club Brugge won 2-1 at Grasshopper, while Borussia Monchengladbach head back to Germany with a 3-2 success over Sarajevo.

There was not much to cheer about for Portuguese fans as Nacional lost 2-0 at Dinamo Minsk and Rio Ave were defeated by hosts Elfsborg, although the latter picked up an away goal in a 2-1 loss.

There were also wins for HJK, Legia Warsaw, Young Boys, Rijeka and Partizan Belgrade, while Metalist Kharkiv and Torino were held to 0-0 draws on the road by Ruch Chorzow and Split respectively.