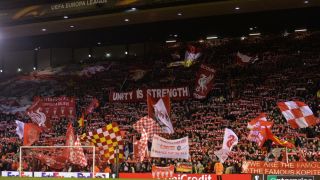 UEFA are expected to reveal any disciplinary proceedings surounding Thursday's Europa League match between Liverpool and Manchester United on Monday.

The last-16 first leg at Anfield was marred by controversy as songs referencing the stadium disasters at Hillsborough and Heysel in the 1980s were heard.

European football's governing body has confirmed to Omnisport that any potential disciplinary investigations resulting from the match are likely to be announced on Monday, with Marouane Fellaini also possibly facing retrospective action for a physical clash with Emre Can that went unnoticed by officials.

Following the widespread criticism of sections of their support, United stated it would hold talks with supporter groups in a bid to curb a repetition of such behaviour.

"It has always been the position of Manchester United that chants of this nature, which refer to historical tragedies, have no place in the game and do not reflect the values the club holds," a United spokesperson said.

"We are in discussion with our fans' groups to seek their support in preventing this type of behaviour in the future."

Proceedings have been opened against Sparta Prague and Lazio following their 1-1 draw in the Europa League on Thursday.

The Italian club is being investigated for alleged racist behaviour and illicit chants, while both face charges of displaying illicit banners.

Czech side Sparta have also been cited for setting off fireworks, with the Control, Ethics and Disciplinary Body set to deal with the case on March 22.