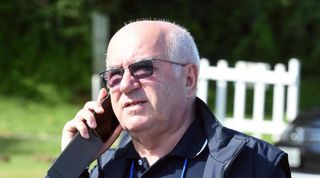 The governing body announced on Wednesday that Tavecchio's conduct would the subject of a thorough investigation following his alleged conduct during his presidential campaign.

Tavecchio, 71, was announced as the FIGC's new president last week, beating Demetrio Albertini to the role.

A UEFA statement read: "Following a request of information made by UEFA on 28 July 2014, Mr Carlo Tavecchio, president of the Italian Football Federation (FIGC), has today been personally informed by UEFA about the decision of its chief ethics and disciplinary inspector to open a disciplinary investigation on alleged racist comments made by him during his FIGC presidential election campaign.

"Further details concerning these proceedings will be announced in due course."

Tavecchio has previously apologised if his comments were interpreted as offensive and said in a brief statement that he would fully co-operate with the investigation.

"I am respectful of this UEFA decision, however it is a due procedure that was expected," Tavecchio said on the FIGC website.

"I do believe that I will have the opportunity to explain both my mistake and my genuine intentions."