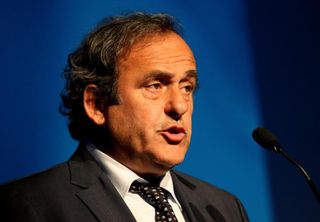 UEFA president Platini questioned whether the Africa Cup of Nations, which is set to take place between January and February next year, should be deferred during a televised debate on Sunday due to the outbreak of Ebola in West Africa.

In response CAF issued a strongly worded statement on Tuesday that criticised Platini as they felt he was calling for the tournament to be postponed.

Platini has hit back at CAF in a letter to its president Issa Hayatou and insists he was misinterpreted and did not suggest the tournament should be delayed.

"At no point did I interfere in any way in the affairs of CAF, and at no point did I call for or support the postponement of the forthcoming Africa Cup of Nations," Platini wrote in the letter.

"I clearly stressed on three occasions during that interview that it was up to you and the CAF to take the decisions that you considered most appropriate. I could not have been clearer on that point.

"Given this irrefutable evidence, it is clear that your statement is based on inaccurate information that has been reported to you. I therefore consider your statement to be unfair, unwarranted and even insulting.

"I have attended a great many Africa Cups of Nations at your side. You know my love of Africa, the African people and African football and that is why this CAF statement has upset and hurt me so much.

"I now expect an immediate retraction of the statement in question, as well as a formal apology from the author of that statement. Otherwise, I will react accordingly."